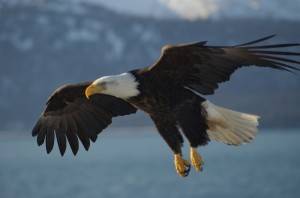 When our resident Bald Eagles are seen hunting on Portage Lake, it seems everything else sort of goes away for a while.   It’s a captivating sight, and you can’t take your eyes off them.   At a distance, it may be hard to distinguish this wonderful bird from other predators, but the typical giveaway is the “flap, flap, soar in a circle, repeat” cadence of the bird’s amazingly powerful wingspan, accompanied by the flash of a brilliant white tail usually contrasted against the dark and leafless trees along the shoreline, as most of them will be seen in early spring, late fall, and winter.   Another feature of the Bald eagle while flying is the somewhat arched appearance of the long and thin outstretched wings.   Contrast this with our many resident Buzzards, which are sometimes mistaken for Eagles, and you’ll find these masters of the thermals rarely flap their wings which are clearly upturned at the ends and have what appear like large fingers, and soar in very large circles, seeming to freeze, positioned into the wind from time to time. They are also typically accompanied by other Buzzards, and I have yet to see a Bald Eagle hunt any way other than alone.

Bald Eagles are also strictly business. If you see one out flying, it’s either on its way to hunt, hunting, or on its way back with a kill.   When I see them on a hunt, I don’t even think of them as birds. Up close they remind me of an airborne predator on the level of a lion or tiger – an animal with wings.   With incredible eyesight, a beak as sharp and strong as any set of long handled pruning shears, and feet with outstretched needle sharp claws about the size of a human hand, you’ve got what amounts to an amazing top shelf predator.

I’ve seen an eagle kill and eat an entire duck on a frozen lake, leaving a trail of feathers blown across the ice by the wind. As an avid angler, I remember being quite jealous at seeing one fly at full speed low across the lake, only to pluck a fish so large out of the water that he could not gain any altitude when flying to shore.  I’m told they can catch another bird in flight, but I’ll have to look forward to seeing that someday.

Though beautiful, the Bald Eagle, and nature, can be quite violent. One calm and peaceful November evening, while sitting on my deck, I heard the telltale rush of wings a flock of ducks makes when they take off, but these small black ducks were not about to leave the surface of the lake.   An eagle was hovering very low over them and had the entire flock compressed into a ball and they were diving under water with every swoop down eagle attack. (See video below.) Over and over again the eagle would attack, and the ducks would dive underwater, and pop back up one by one. This went on for several minutes when finally the eagle hit the water hard right in the middle of the flock, which I was sure was an accidental crash landing.

Sitting in the water, the eagle looked like he was in trouble.   He’d do a wing flap here, a wing flap there, and attempt to flap both wings several times to take off, but could not.  It looked like all he could do was keep himself upright with a slow wing flap now and then. I was sure he was waterlogged with soaked feathers that added just too much weight for him to get off the water, and saturated wings no longer aerodynamic or efficient. I wanted to help. Should I get in the kayak and go out there? What on earth would I do when I reached him? Get torn to shreds for sure. Yet I had this internal struggle as I continued to watch, and from my own ice water experience sure that hypothermia was setting in; he was sure to be in pain and getting sluggish soon as a human would be. If he drowned I would have never been settled with the fact that I just stood there and watched.

This went on for at over five minutes, when without any warning he simply lifted off, gained altitude, and flew in a large circle from his position in the water. Then, with a long slow decent, the eagle hit the water again in the same location, but this time remained airborne as he lifted a dead duck out of the water and headed for shore.

I put it all together.   The eagle had purposefully hit the water in the middle of the flock of ducks, as it was the only way to catch one as they dove underwater to escape, then returned to the surface one by one. Though looking like he was in trouble when flapping a wing here and there, he was simply balancing himself on top of the duck to keep it under water and drown it.   Instinctively he knew how long he had to stay in the water to accomplish that for a diving duck accustomed to holding its breath for extended periods of time to feed.   Though sure his prey was dead, it was too heavy for him to carry while taking off so he had to take off, circle back, and grab the duck just like a usual, instinctive catch.

I was torn again.   I thought it cruel for the eagle to drown the duck. Yet, I understood this is how nature works and has forever, the hunter and hunted, predator and prey, the circle of life, and the food chain I had been watching on my home Portage Lake all my life.   I couldn’t resist my thoughts drifting back to the nobility of this great bird and that he was doing what he had to do to survive – and he was excellent at it. What incredible intelligence and instincts to have pulled off the whole event.   What amazing endurance of pain and fatigue in ice water that during the same time would have completely incapacitated a person and sent them to the hospital with cold damage injury. Just when I thought I already had a full admiration of this wonderful bird, yet another unexpected experience played out in front of me.   At that moment I thought of our wonderful Bald Eagle with even more awe and respect.