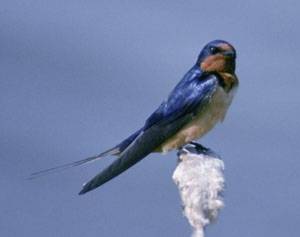 Pete Dunne’s “Tine-tailed Swallow” has long captured the imagination of poets and writers with its acrobatics, iridescence, and familiarity. Barn Swallows are found around the world, with six subspecies found around the world. All of them breed in the Northern Hemisphere; four are strongly migratory, wintering in Africa and South America. In North America, the erythrogaster subspecies breeds across North America and winters as far south as Argentina.

Barn Swallows are very comfortable around humans, as their name implies. Before the arrival of Europeans, they built their cup-shaped mud nests on cave walls; however, once permanent structures were constructed, they readily adapted to nesting on the undersides of bridges and the eaves of barns. The last population of cave-nesting Barn Swallows is on the Channel Islands in California. This switch to man-made nesting sites has allowed them to become one of the most common North American swallows. They forage over water and fields of all kinds, hunting for flying insects with broad, acrobatic swoops. Studies estimate that Barn Swallows cover six hundred miles a day gliding for insects.

Around the Portage Lake Chain of Lakes, Barn Swallows are quite common summer residents. They breed underneath bridges and on ledges and eaves around boathouses or other structures. They can be readily identified by their long, forked tail, unique among North American swallows, their swooping flight, and their shiny blue back and rust-colored forehead and throat. The tail has white panels on the inside edges; the belly is a soft buff color. Males are slightly darker than females and have longer tails, although the differences are slight; both sexes are about 7 inches long, an average size for a swallow.

Barn Swallows arrive in most of the Midwest in early April, just as the first flying insects are coming out. They migrate in flocks, typically flying from South America through Central America to North America. Early-arriving Barn Swallows often concentrate over lakes during cold snaps, often picking dead insects off of the water. Barn Swallows feed mainly on flies, particularly horseflies and other biting flies, but they also augment their diet with other flying insects, including mayflies, beetles, true bugs, and damselflies. Barn Swallows drink on the wing, sipping water by skimming over a water source. They often call in flight, giving a variety of gurgling notes and dry, mechanical buzzes. In the fall, Barn Swallows begin migrating between the end of July and early October; they are usually gone by the first frost, which severely reduces the availability of flying insects. During fall migration, they often roost in marshes, staging at twilight in large flocks that plunge spectacularly into the cattails. This behavior led many Europeans to believe that swallows buried themselves in mud and hibernated, rather than migrated. The swallows spend the night perched in the cattails before lifting off the next morning to continue migrating.

Swallows occasionally swim when they fall into water by accident; however, this rarely occurs, as swallows are masterful aeronauts. In addition to traveling long distances with ease, they can chase down flying insects, relying on pinpoint maneuvers to accurately catch prey. A lone Barn Swallow’s foraging flights are a display, swooping low over the water before soaring up and spiraling higher again. With their beautiful plumage, acrobatic flight, chortling call, and affinity for people, Barn Swallows are often considered omens of good luck.