… Or Would You Rather Be a Bird? an essay by Sarah Toner

I’ve always wanted to be a bird–to be able to lift off, pumping my wings to shape the air beneath me and guiding my path with my spread tail. I’d love to row softly through still air like a thrush or power through storms like a jaeger. I could shear the surface of the ocean or fly over Mount Everest, or I could fly from pole to pole like an Arctic Tern, traveling the world on my own wings.

I’m not alone. The human desire to fly goes back at least to the ancient Greek myth of Daedalus and Icarus, who made wings out of wax and feathers and became jailbirds until Icarus flew too close to the sun, melting the wax and plummeting to his death. Leonardo da Vinci also sketched plans for a helicopter, parachute, and glider. Later, in the 18th century, people managed to use hang gliders and balloons to rise to the height of birds, but most of these devices were not portable, required help taking off, or lacked controls. Orville and Wilbur Wright were the first to make a manned, powered, and controlled flight in an airplane, but they crashed after twelve seconds–not an auspicious start to human flight. Even now, there is no way for a human to fly at will on his or her own power. Without the help of an airplane, we have to lumber around on the ground, dodging holes and rocks and trudging through mud, sand, and snow. 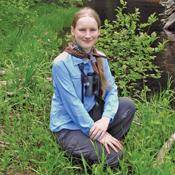 Flight has its drawbacks, of course. In order to reduce their weight, birds have hollow, delicate bones that are quite fragile. Being smaller and lighter than we are, birds cannot take heavy carry-ons on their flights. Fueling flight isn’t easy, either. Modern birds spend almost all of their waking hours fighting starvation, and some of their food sources, such as fresh-plucked caterpillars and ants, don’t appeal to our palates. While I would guess that caterpillars are much more nutritious than fast-food mystery meat, and I hear that roasted ants taste like barbecue sauce, a diet of ants and caterpillars might not appeal to most people. We can take comfort, however; as birds, we’d lose much of our sense of taste and smell. While some species of birds, such as turkey vultures and kiwis, have good senses of smell, they use their smell to sniff out rotting meat and worms, so most of us would probably choose to become one of the vast majority of bird species that can’t smell well.

Most bare parts on a bird are covered in scales that aren’t as sensitive to touch as human skin, so in addition to losing our sense of touch, we’d also lose primates’ most unique feature: opposable thumbs. Birds simply cannot manipulate things the way we can with our hands. Beaks can do remarkable things, however. Crows can manufacture and manipulate tools with beak and claw similarly to the way humans use thumbs and fingers, and many species of birds build complex nests woven together with their beaks. Weaverbirds build the best examples: sturdy hanging sock nests, built out of grass, that hold their precious eggs and chicks.

Even though we would lose opposable thumbs and dampen our senses of taste, smell, and touch in the transformation from human being to bird, we would be able to hear and see very well. Most birds’ hearing is sharper than ours, extends to a wider range of pitches, and seems to allow birds to hear the true complexities that we cannot discern in their songs. With the exception of some nocturnal birds, most birds also have sharp vision, allowing them to spot food and navigate in the longer distances they cover in flight. There is also growing evidence that birds can see in the ultraviolet spectrum, a range of colors humans cannot see. We’ve discovered how to bring UV light into the spectrum that we can see, but birds see it glowing wherever they go: on a male Blue Tit’s crown, on a lemming’s urine trail, and on a European Blackbird’s bill. Humans cannot begin to guess how the world would look with the 20/4 vision of an eagle or the vibrant spectrum of colors with ultraviolet shades that are foreign to us.

In order to preserve their sharp vision, birds have what I believe is their most enviable adaptation: the nictitating membrane. I honestly don’t understand why our own nictitating membranes atrophied into the Plica Semilunaris, a useless vestige of our ancestors; I can’t think of any evolutionary trade off that would be worth the sacrifice of such a useful body part. As birds, re-evolving our nictitating membranes would give us third eyelids, light blue and transparent, that could sweep horizontally across our eyes. With nictitating membranes, birds can a) blink without losing sight of prey, b) keep their eyes moist when diving or flying in the wind, and, best of all, c) see and clear their vision during stormy or harsh conditions. I am rather surprised that humans have not invented a better replacement for nictitating membranes, given how useful they are. Couldn’t we do better than sports goggles?

Being a bird wouldn’t appeal to everyone, but anyone interested in trading opposable thumbs and refined taste and smell for flight and the auditory and visual upgrades that birds offer could choose a species based on its desirable attributes. Do you want agility and small size? Choose a chickadee, my personal favorite. Would you rather fight than fly? If you value strength, don’t need to fly, and want to live in a tropical environment, a Cassowary fits the bill. Soaring high on the warmth of the sun is easy if you’re a Turkey Vulture, but if you appreciate hard work, try flying at 20,000 feet with a flock of Bar-headed Geese. If you want intelligence, the Corvid family is a fit for you. If you cherish beautiful singing, you should opt to be a thrush. The sheer variety of birds means that there is a bird for everyone, if everyone could be a bird.