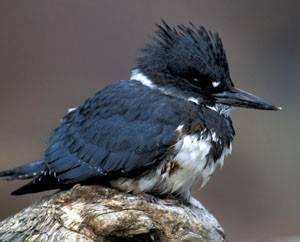 A common sight along wooded riverbanks, Belted Kingfishers plunge-dive for fish from perches along the waters’ edge. They will occasionally hover to dive over open water, sometimes submerging themselves completely underwater in order to grab a fish, crayfish, or frog. They are almost always seen flying along or perched along rivers, lakes, or ponds. In flight, they often fly low to the water, skimming the surface with the tips of their wings. They have a top-heavy profile created by their long, thick bill, their large head, and their short tail.

Kingfishers are fairly small birds, about the size of a Rock Pigeon. Both sexes are slate-blue on top with a spiky crest and pale white below with one or two colored bands across the chest. Unlike in many bird species, the females are more colorful than the males: while both sexes have a blue “belt” across the chest, females have an additional rust-colored belt across the belly. In flight, the wings show white patches on the outer flight feathers.

Kingfishers often give a loud, rattling call in flight, an easy way to detect their presence. They nest in tunnels burrowed into eroded earthen banks near their territory, and the pair defends the territory by calling frequently and chasing any rivals away.

Some observers have reported parents dropping stunned or dead fish into shallow water to teach the fledglings (flighted chicks) how to dive for food.

The scientific name, Megaceryle alcyon, comes from the Greek myth of Alcyone, a woman who threw herself into the sea after her husband drowned. According to legend, the gods took pity on her and turned her and her husband into a pair of kingfishers that continue to plunge into water. Interestingly, both the Greek ceryle and the Latin alcyon translate to “kingfisher,” so the scientific name translates to the tautological “big kingfisher kingfisher.”

The phrase “halcyon days,” the two weeks of calm weather around the winter solstice, also come from this myth. Supposedly, Alcyone was the daughter of the god of winds, so her father calmed the winds while she was nesting so that she could nest safely. Most kingfishers actually nest in the summertime, however.