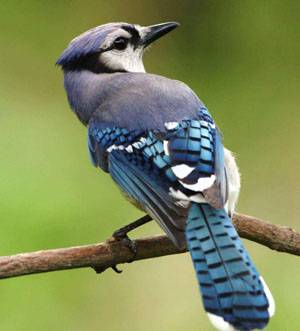 A Sandhill Crane flock flies high above in a perfect V against a brilliant blue sky, heading bravely toward the tip of Whitefish Point, the last piece of land for sixteen miles. They reach the end of the beach and continue on, flying over Lake Superior. I raise my camera, snap a few photos, and check the screen, but my pictures are flecked with smudges. Dang Blue Jays! I take a few more, but a steady stream of jays dots the sky like swarming bugs. Many people know about the warbler migration, the hawk migration, and the Sandhill Crane migration, but few people know about the Blue Jay migration. Although most of the Blue Jay’s range is year-round, the individuals in an area are not always the same birds. Across the Midwest, bulkier northern birds move south in the fall to replace some of the population of southern jays. The massive flocks here are a mix of northern and southern birds heading north, back to their breeding grounds.

Across much of the eastern U.S, the Blue Jay is the only jay. The two other eastern species, Florida Scrub-jay and Gray Jay, are only found in the U.S. in limited areas. Blue Jays, on the other hand, are ubiquitous, thriving in forests, where they can move quite silently, as well as in suburban areas, where they swarm feeders in loud flocks. Their wit, obstinacy, and partial migration have helped them survive in both wild and suburban habitats. As a member of the Corvidae family, jays show impressive intelligence, and they use it to remember predators and locate food sources, sometimes raiding the nut stashes of squirrels. They even use their intelligence when building nests; for instance, they can recognize when a dog is sleeping and take the opportunity to grab a beakful of fur. Many people dislike Blue Jays because they scare smaller birds off feeders, but the Blue Jay’s fortitude is impressive. In the past five years, Blue Jay populations have held steady despite growing urban sprawl and the loss of many eastern forests (eBird). For an 11” bird, that is quite an accomplishment.

Returning inland from the beach, I rest on a bench, watching some feeders while I wait for my ride. Overhead, Blue Jays continue to flow northward on the flyway, a giant flock stretching across the sky in all directions. Next to me, even more jays are drinking from the birdbath, feeding at the feeders, and hopping all over the ground. Suddenly, a screaming chorus rings out, and a brigade of a hundred jays lifts out of the trees in front of me and fills in the ranks of the moving flock high above, like cars merging onto a highway. Their broad, flashing white-blue-white-blue wings, when multiplied by a hundred, astonish me.

When I first began to watch Blue Jays in my backyard, I immediately noticed the glimmering blue, black and white on the wings, so striking against the greens and browns of the grass. Then I noticed the pale periwinkle on the nape and mantle. It is tough to capture this powdery purple color with a camera. Some subspecies of Blue Jay show no purple on the back, but instead a slightly lighter color of blue than is on their wings. When I look at many pictures of different Blue Jays, their color seems to range from bluish to strong purple. In addition, the variation in color among individual birds is compounded by shifting shadows and lighting in the field.

Cyanocitta cristata is the scientific name for Blue Jay. The sound of the name reminds me of the bird, with the contrast between the soft ‘s’ and hard ‘k’ sounds from the same letter echoing the difference between the quiet forest troupe and the loud feeder mob. Although I later realized that cristata means “crested,” the name originally reminded me of “Cyan” and “Crystal,” words that seemed to describe the jay’s wings, like stained glass, with cerulean, light blue, and small white panels barred in leaden black. The many distant blurry dots in my photos could not even begin to capture the jay’s soft purple-blue beauty, and could only begin to show how many jays there were in the sky that day. Nor could they convey the clever, raucous toughness that has contributed to the jay’s survival for five million years. (Science News)

Later that night, the owl banders described hearing alarm calls outside and discovering that a Saw-whet Owl had snagged a Blue Jay. That particular Blue Jay did not escape, but the other jays were already responding to the threat, yelling out warnings to birds in the area and joining together to shoo off the owl. Using their intelligence and moxie for protection and adaption, Blue Jays will probably survive for another five million years. As individuals and as a species, jays are indeed the very picture of tenacity.