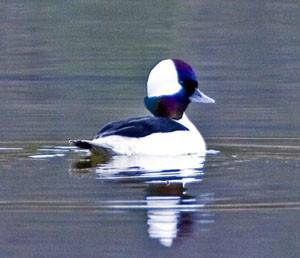 One of the smallest ducks in North America, tied with Green-winged Teal for the smallest, this common duck dives for food in a wide variety of water depths. Unlike many species of ducks, Buffleheads are small enough to take off from water without needing to run along the surface for momentum. In the winter time, large flocks dive simultaneously and surround fish in order to corral them and increase feeding success.

Buffleheads’ large, blocky heads and small size are distinctive. The male has a black back with white sides and chest and a large, semicircular white patch behind the eye. The rest of the male’s head is a glossy purple-blue iridescence, which appears dark or black without direct sunlight. The female is mostly gray-brown, with a white wing patch and a small, white teardrop-shaped patch behind the eye.

Buffleheads can be distinguished from other ducks by their small size, blocky head, black-and-white body, and large white ear patch. There are two other blocky-headed, black and white ducks that are similar to Buffleheads. Hooded Mergansers have a black border to the white patch, rufous flanks, and a long bill, while Common Goldeneye have a small white patch in front of the eye instead of a larger one.

Buffleheads are common winter residents in the Chain of Lakes. The birds that winter around the Great Lakes breed in central Canada, while other populations in the northern Rocky Mountains winter along the West Coast. Buffleheads center their breeding range around boreal forest and aspen-parkland habitats, which provide nesting sites.

Buffleheads actually nest in tree cavities, one of a handful of North American ducks to do so. There is one confirmed record of a nest in a ground-squirrel burrow, but successful breeding was not confirmed. Because they lack any tools to excavate any cavities, they use old cavities from other species, particularly Northern Flickers; Buffleheads have probably adapted to use flickers particularly, as no other North American duck can use the small holes of flicker cavities.

After hatching, at only a day old, the young chicks leave the nest cavity by jumping out, sometimes from cavities up to ten feet high. After leaving the nest, the chicks follow the mother to the safety of a nearby pond or lake, where they learn to dive for food and continue growing their feathers. After five or six weeks, shortly before their first flight, the ducklings will be fully independent and the mother will leave.

The common name actually comes from a common nickname “Buffalo Head;” the large, blocky head of the duck reminded European explorers of large-headed bison. Buffalo Head is only slightly more flattering than another colloquial name: “butterball,” referring to the bird’s large fat reserves during fall migration. The scientific name Bucephala albeola, translates to “bull-headed” and “white,” referring to the distinctive head shape and pattern.