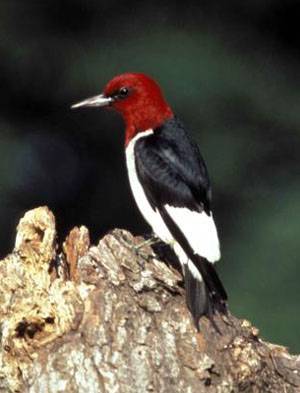 A flashy woodpecker of open woodlands, Red-headed Woodpecker populations have had erratic cycles of abundance. Currently, it seems that populations are on the decline, presumably because of the maturation of open forests from farm clearings. As more open habitats grow understories that block foraging space, this species will probably become even more scarce. Red-headed Woodpeckers are found around the Chain of Lakes in open woodlots, especially lawns alongside lakes.

Males and females look alike and have distinctive plumage. The bright red head is accented by a white chest and white patches on the backs of the wings, which contrast with the black back and outer flight feathers. Juveniles look similar, but have brown on the head rather than red. The call is a hoarse cry similar to a Blue Jay, but with a harsh, rattling quality. Red-headed Woodpeckers also drum on hollow, resonant tree trunks, though not as prolifically as other woodpeckers. Pairs usually call rather than drum to communicate.

Red-headed Woodpeckers have a diverse diet, often flycatching for insects and caching food. They are omnivorous, feeding on occasional bird eggs, insects, and even mice, but they primarily feed on nuts, seeds, and berries, particularly hard nuts such as acorns and beechnuts. The erratic distribution throughout history is probably caused by a combination of habitat abundance (including the clearing of forests for farms) and food abundance during tree epidemics such as the spread of the chestnut blight and Dutch Elm disease.

Red-headed Woodpeckers were named for their colorful head plumage, but they have also had a suite of descriptive colloquial names including “shirttail bird,” “flag bird,” flying checker-board,“ and for some reason, “jellycoat.” The scientific name, Melanerpes erythrocephalus, is an almost literal translation of the common name: Melanerpes is the genus name for most woodpeckers. It translates to “black creeper,” a descriptive name for the birds in the genus. Erythrocephalus comes from the Greek eruthros, red, and kephalos, headed.

(Author’s Note) My own experience with Red-headed Woodpeckers traces back to several years ago on Portage Lake. As I was beginning to take an interest in birds, I was standing on the edge of the lake when a Red-headed Woodpecker flew onto a tree trunk a few feet from me. Even without binoculars, I could easily see the striking blocks of color on the bird. Red-headed Woodpecker is one of my earliest memories of seeing a bird, but I have only seen them sporadically since, and they are always a treat to see.