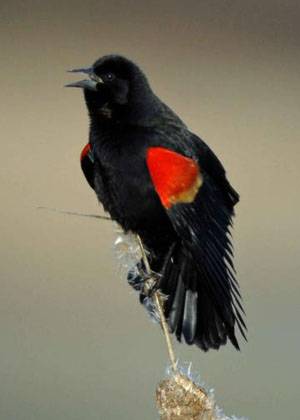 Males are glossy-black with bright red shoulder patches, bordered in yellow. Females are brown, with dark streaks covering the entire body and a slightly peach-colored face. Females could be mistaken for sparrows, but their extensive streaking and long, triangular bill distinguish them from all other species. During the breeding season, males give a loud “conk-la-ree” call, raising their wings to show their epaulettes. Females and males give a quiet “check” call to communicate with other birds. Both sexes also give a variety of whistles and “ti-ti-ti” courtship calls.

Red-winged Blackbirds are abundant summer residents in marshes and fields around the Chain of Lakes. Between late October and mid February, Red-wingeds retreat from their summer territories and can be hard to find near the lakes; however, they roost in flocks in agricultural fields around North Territorial Rd. and the Chain of Lakes. Red-winged Blackbirds are abundant in cattail marshes across North America, from Guatemala to the Yukon.

Red-wingeds breed in large numbers wherever grassy or marshy habitat is found. During the breeding season, Red-wingeds form very specific territories and defend them vigorously from any intruders. Males are also highly polygynous: a male may have up to 15 females breeding on his territory, depending on the quality of his territory and his dominance. The female weaves a nest around plant stalks in the marsh, using plant stems, mud, and wood to form a cup-like structure.

In the winter, northern populations move south and congregate into massive flocks with local birds, often feeding in agricultural fields and roosting by the tens of thousands in marshes and fields. These flocks usually fly in long, narrow ropes, approximately twenty individuals in diameter, which can stretch across the sky for miles. Winter flocks feed primarily on plant matter, particularly stray grain from agricultural fields and weed seeds.

In the summer, their diet switches to primarily insects and arthropods from the marshes. Red-winged Blackbirds have an all-purpose bill that they can use in a variety of ways to find food, such as prying open woody material to expose insects, probing in mud, or turning over small stones in streams. Red-wingeds will also occasionally flycatch, darting out from a perch to catch an insect in flight.

The large winter flocks of Red-winged Blackbirds at dusk and dawn are breathtaking as they fly in to a roost marsh or out to farm fields by the hundreds, thousands, or even tens of thousands. It is an amazing sight to see a three-mile long ribbon of birds stretching across fields as far as the eye can see, calling loudly all the way. This swirling spectacle of nature is a precious site, and one that will hopefully be around for years to come.